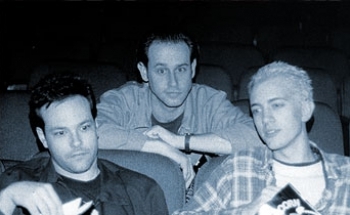 Instead of writing their band bio for them, The Mr. T Experience were so punk that they insisted on writing it themselves! Have a look as MTX bassist Joel Reader reflects on the high (and low) lights of the trio's unadulterated existence (circa '02?)

When I received a phone call from one Grant Lawrence, Smugglers frontman, Mint Records honcho and all around swell guy, informing me that I was duty-bound to author an informative piece on and about my band The Mr. T Experience for the Mint home page, I was honoured to be entrusted with such a significant task. As the first band to be brought aboard Mint as part of their international alliance with Lookout! Records, we in The Mr. T Experience feel it is of the utmost importance that we properly convey just how pleased we are to be in the fold.

We love Mint and love being a part of Mint, if for no other reason than that Mint Records is so... so... well, CANADIAN! It's hard to explain why, but you Canadians have really won the collective heart of those of us in MTX. Perhaps it's because you have so many great bands, such as the Smugglers, with whom we have spent the greater part of the last year touring North America, or perhaps it is simply for your Canadian pluckiness and affability: sure you may not win any medals in this year's Olympics, and sure you may not be able to build a car (you do, however, produce a fine bicycle, and it's best to work up to these things one wheel at a time), but you know your rock and roll, and those Mounties of yours always get their man. Mostly, I'm sure, it's because you've made us feel so welcome, and that is why we are proud to be a member of the Mint Records family.

For those of you who may be unfamiliar with the Mr. T Experience, allow me to indoctrinate you (I resisted the urge to say "let me introduce you to our dumb little band"): First and foremost there is Jym (spelled with the exciting "y" in lieu of the boring "i") anchoring the band from behind the drums. Besides being an animal on the skins, Jym is also the requisite "strong and silent type" of the group.

Next is our intrepid leader, Dr. Frank, who fulfills no less than the duties of guitarist, lead singer, and resident genius. In my humble opinion Frank is perhaps the most gifted songwriter and lyricist of our time. Of course, a more cynical reader would note that I have a vested interest in saying this, or even criticize that I have an unhealthy fixation on the members of my own band. Nonsense, I say. (By the way, did I mention that in his senior year of high school Frank held the highest SAT score of anyone in the entire country? He's so dreamy!)

As for me, my name is Joel, and besides providing the bass playing and back up vocaling, my main duty within the band is to lower the average age of the members from 30 down to 26. I recently dropped out of college and broke my poor mother's heart to devote my life to rock and roll debauchery. Together we are MTX. We all squandered what were promising futures in order to toil in the relative semi-celebrity of a punk rock band that plays two-minute songs about girls. (Our detractors would claim that all of our songs are about girls, and well... they'd be right. But, hey, if being obsessively single minded on the subject of the fair sex is wrong then I don't wanna be right.) This band has taken us to all four corners of the globe, where literally dozens of people have seen us play and sing our little hearts out every night.