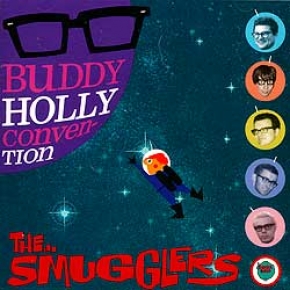 As a reaction to the constant cat-calls The Smugglers received on their choice of eyeware as their noteriety grew among hepcats, The Smugglers aptly titled this mid-career collection of rockers Buddy Holly Convention. Produced by patented rock'n'roll genius Kurt Bloch, Buddy Holly Convention showcases songs — six on the CD and four on the seven inch — recorded directly after the exhausting '96/97 Selling The Sizzle campaign. The results are a furious collection of tasty tunes with colorful titles like "Melee In Madrid", "Cans Of Love", and "She's A Machine", making this a must have for any Smugglers fan.