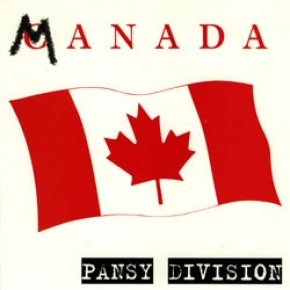 Mint’s first release of 1997, Manada is the follow-up to Pansy Division’s wildly successful and incredibly catchy Mint/Lookout 1996 full-length, Wish I’d Taken Pictures. Exclusive to Mint Records, and as concept-laden as any Pansy Division release, Manada is the band’s love letter to Canada, and to the men that make us what we are. Produced by legendary knob-twiddling heavyweight Steve Albini (Nirvana, Jesus Lizard, Big Black, Shellac, Cheap Trick), the 7” also features the drumming talents of then-new addition Luis Illades. Among the four songs on this deluXXXe 7” is a cover of "One Night Stand" by fellow Mint labelmates, Maow, as well as an all-French version of the title track.