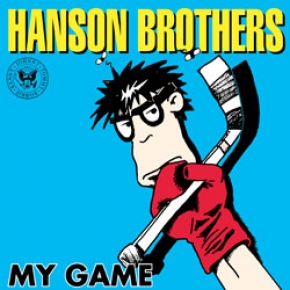 The Hanson Brothers is the puck digging, bench brawling alter-ego of Victoria, BC punk legends Nomeansno. With a rock'n'roll legacy built on sharp wit, love of the game, and hoser-inspired antics, the Brothers were forced to ditch their European Sudden Death tour, and fast, following a disastrous incident in Bremen that involved two Hanson Brothers and a melon vendor. Fortunately, all criminal charges were dropped.

A play off Black Flag's My War (as if I even need to tell you that), the Brothers' third full length, My Game, came out on Mint in 2002. If there was any doubt these underdogs could complete the hat trick given the impossibly high standards set by their previous releases, Gross Misconduct and Sudden Death, My Game sends them back to the minors.