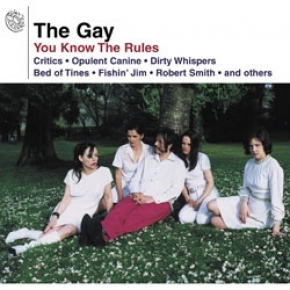 The Gay manage to forge an original sound that, while not emphasizing variety or stylistic exploration, has enough personality and flair to separate them from the glut of hum-along guitar-driven pop outfits. You Know the Rules may not yet have achieved the indie megahit status of the last two New Pornographers albums, but given enough exposure, it certain could. There is no word yet, however, on whether or not the band members are, in fact, actually gay. - Michael Cramer, Dusted

... the vocal harmonies are well done, with the entire band contributing at times. "Opulent Canine" is the album's most memorable track, buoyed by that darn accordion (whaddya know, the gimmick kind of works), an endearingly clunky guitar lick, and a soaring chorus that would make Carl Newman proud. "Critics" continues in that same New Pornographers/Zumpano mold, but is more understated and sweet, especially when they sing gently, "If the critics are so wrong, why do you have to be so tough?" The plaintive, wispy, twee pop of "Cindy Lou" is another standout, in which the band namechecks rockabilly legend Wanda Jackson, while "Fishin' Jim" has Maija Martin's accordion adding a playful Cajun flair to an already cute song. - Adrien Begrand, PopMatters

Their debut record, You Know the Rules, is one indie pop high after another... essential for lovers of the New Pornographers and Vancouver pop. The group is right up there with Papas Fritas and Saturday Looks Good to Me, bands whose members believe in pop music and love, and have the magic power to make the listener believe in them too. - Tim Sendra, AllMusic