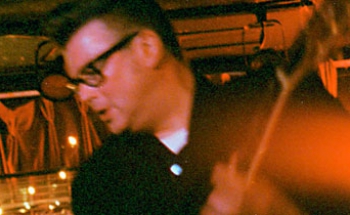 If, like many folks, you fondly remember Canadian instro-rockers Shadowy Men on a Shadowy Planet and their theme music for the legendary sketch comedy program The Kids in the Hall, then you're ready for this slab of instrumental gold from Brian Connelly (one of the Shadowy geniuses) and his band, Atomic 7.

Sometime between the birthdays of Joe Tex and Webb Pierce in the year 2001, an instrumental rock & roll band was born in a small oven in Toronto. Atomic 7 was a combo equally at home in Vegas dives, west Texas honky tonks or Hamilton elevators, hell bent on reestablishing go-go dancing in clubs across the country.

Their debut album Gowns by Edith Head was released in January 2003, and featured Brian Connelly (Neko Case & her Boyfriends, Shadowy Men on a Shadowy Planet) on guitar, Clinton Ryder on double bass and Mike Andreosso on drums. It was followed by En Hillbilly Caliente in June 2004, with Mandi Bird taking over for Ryder on electric bass.