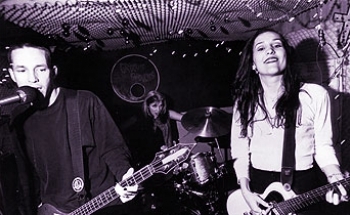 THE GROOVIE GHOULIES AND THEIR CATS

by Kepi and Roach

Hello this is Kepi Ghoulie. Roach and I are here to tell you about our cats. Although The Ghoulies only have two proper cats, we also have several hangers-on.

First up is our cat Kapu. Kapu came to us from Wendy (GG's drummer) who brought him home from her work. He is furry and grey. His hobbies include attacking The Smugglers when they are on tour sleeping over at our house. When Kapu attacks your bare skin we call it a "shark attack". He hides under the bed ready to pounce.

Kapu is the named of the cat in the Elvis movie "Girls Girls Girls". The cat in the movie could predict the weather. Jon Von (whose cats include Huna, and a brand new black kitten tentatively named Ella) told me that Kapu in Hawaiian meant "taboo" originally and nowadays it means "KEEP OUT". Jon Von should know 'cause he knows a lot and one of his cats has a Hawaiian name too. Huna is very well mannered and I don't know if Huna likes Jon Von's world famous punk rock mango waffles, but Julie does. Julie is not a cat. Hi Julie.

Wendy's cat is named Bela. Bela is a furry white cat from New York. I have just been informed by Roach and S. Britt that it is spelled BeLLa (two l's), like beautiful... If I had a cat named Bella I would spell it BeLa, like Lugosi. Anyway, rumour has it Bella was an orphan in a New York park (I say Central, but it's the only New York park I know...) when Wendy rescued her and brought her to California. When we used to watch movies Bella would be my movie buddy and sit on my chest the whole time...

We are writing this stuff over at the house of S. Britt and his wife Melissa. S. Britt drew our album artwork and cover for World Contact Day. S. Britt and Melissa have two cats Freaky and Edsel. Freaky had kittens and our friend Cory has one named Kiwi.

Anyway... we have only been to Vancouver but what we have seen of Canada we love (thank you Rose Softie and Dave Smuggler). Hope to see more and hello to our friends at Mint and the bands and people we've met. Oh yeah, we have no dogs.

Goodbye from Kepi
and The Groovie Ghoulies

PS. Roach's mom's cat Froggy is at least 15 years old and is cool. My parents have my old cat Blackie that my friend named after the guy from W.A.S.P., after he changed it from Jello Biafra.

The Ballad of Mr. Jenkins and His Posse by Roach

We were adopted by a cat named Mr. Jenkins. We call him Jenkie & Jinks. He's orange & dirty. We feed him every night & he shares his food with his friends, Shaggy & Fluffy. He's very sweet & wants to cuddle & make "Kitty Bread" on your lap. Sometimes he goes crazy & bites but he doesn't mean it. One time it was raining real hard & we let him stay on our couch while we went to a club. He was in the same spot when we got home...