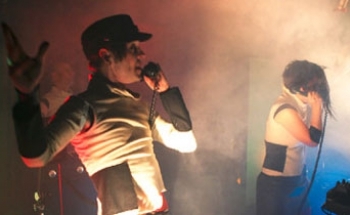 I Am Spoonbender started as a recording project in early '97 by Pansy Division drummer Dustin Donaldson (who handled synths, drums, and vocals) and Brian Jackson (bass, synths, Protools). As cuddlecore champions cub fizzled out, their guitarist Robynn "Cup" Iwata joined the band to add extra color on the synths and vocals as they were halfway through the making of their debut album Sender/Receiver, with Marc Kate (synths, turntables) joining shortly thereafter.

It's a rare case when people of such disparate musical backgrounds can forge an experience as focused and strong as I Am Spoonbender. The band's records are heavily informed by filmmaking techniques, and they remember ALBUMS. Thus, they pay an overall attention to structural development, a melding of the band members' love for pure sound, pop song, and innovation.

Released in September of 1999, Sender/Receiver was designed to be listened to as a whole [though it also works as individual songs]. Immediately gratifying, but revealing more with time, the album remains a time-space disruption that allows '67, '79, '82 and '99 to exist simultaneously. It was followed up in Y2K by the mysterious Teletwin. Cased in black with traces of yellow in the spine and track listing, that EP continued their evocative exploration of timeless synthetic pop.

During this time, I Am Spoonbender earned a reputation as a formidable live act, dubbed "one of the most unique and creative live bands around" by Pitchfork, while their 2003 set at the Knitting Factory in New York was called "near perfect" by PopMatters. They performed on bills with Mogwai, Cibo Matto, The New Pornographers, Wire, Money Mark, Hot Hot Heat, Mike Patton, Siouxsie and the Banshees, Kid606, The Faint, Grandaddy, Trans Am, The Notwist, and Explosions in the Sky, among others.

Shortly after the release of Teletwin, Brian Jackson left to form Memory Systems. I Am Spoonbender would go on to release another single called Shown Actual Size in 2002, and their sophomore album Buy Hidden Persuaders in 2004. Since then, they largely performed under the name Spoonbender 1.1.1, an incantation without guitars or vocals that saw its debut album Stereo Telepathy Academy released in 2006.

"I Am Spoonbender skirt that concept of forward-looking music by peering toward a future that is firmly entrenched in the past but has yet to take hold, a future that is paranormal and psychological and cinematic as much as it is cyber-this or techno-that, one filled with lethargic room-size computers, stilted typefaces, and the idealism of the unknown rather than megabyte-paced paranoia and deep-seated cynicism." - Stanton Swihart, AllMusic

"... the most innovative live-instrument electronic rock band around, with a hypnotic, surprise filled show that reveals others to be mere pretenders... I Am Spoonbender belong in one category only- their own." - Village Voice