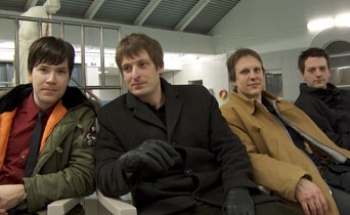 You got to be a certain kind of hardcore to purposely live in Winnipeg. The city has been the subject of a lot of friendly ribbing regarding its two "seasons"... life-threateningly freezing and biblically mosquito-ridden. Pushovers, cry-babies, and the constitutionally challenged flee the town in droves. But some... the tough, the uncompromising, the unsettlingly visionary... they stay, and by staying they discover, like the Arctic explorers of yore, that adversity breeds strength, and that survival requires teamwork (or cannibalism). Novillero is comprised of just such people.

It all started as a lark, back in 1999, when former members of Duotang and Transonic, as well as of some of Winnipeg's other most notorious bands, got together for a harmless little jam session. Some beer was consumed, some songs were sung and the next thing you know, Novillero was formed. Comprised of Rod Slaughter (keyboards and vocals), Sean Stevens (guitars), Dave Berthiaume (drums and vocals), Grant Johnson (bass and vocals), and Jack Jonasson (tambourine, percussion, vocals, synths), Novillero made a tight and versatile keyboard driven Mod-Pop combo whom you wouldn't mind bringing home to Mom… provided she has liberal ideas about dancing on the furniture and breaking the family heirlooms. Musically, they are a veritable paisley shirt of eclectic influences; some High Numbers-era Who, some Forever Changes-era Love, some soul of 70's TSOP… all delivered with the ferocity and garage-on-fire style of the Small Faces.

Since forming, Novillero received more than their fair share of critical acclaim, both for their well-crafted, tuneful, and fun full length albums (Brindleford Follies and Aim Right For The Holes In Their Lives), and for their energetic and engaging live performances. They have shared the stage with such acts as The New Pornographers and The Weakerthans… they knocked a significant number of people dead at the Winnipeg Folk Festival and Jazz Festival and Brighton, UK’s The Great Escape… they were declared the Buzz Band of the 2006 NXNE Music Conference… and their TV credits include appearances on the once-acclaimed hit show Monk and various film, corporate, and television music placements.

2008 saw the release of Novillero's third full length album (the second on Mint Records), A Little Tradition. Recorded by Cam Loeppky and Shawn Dealey at Prairie Recording Co. Studios, A Little Tradition has Novillero expanding the borders of their dominion. Retaining a strong mod-pop backbone, they continued their forays into lush pop and included several songs featuring the powerful, yet winsome, vocals of Nathan’s Keri Latimer. A Little Tradition is a Swiss army knife of an album, including tools for dancing, drinking, cogitating, and just plain hanging out - perfect for both a Saturday night and a Sunday afternoon.

So, say what you will about Winnipeg. Winnipeggers can take it… they have Novillero and you don’t.

Aim Right for the Holes in their Lives
MRD084 / May 3, 2005
Digital Purchase
Mint Store

The Art of Carrying On