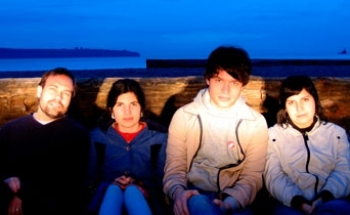 This restless creativity was exactly what it meant to be P:ano, eschewing one sound for a multitude of sounds, taking up whatever was musically contingent when necessary. Even back when they first began, P:ano already sounded like more than just a collection of their audible influences, which included The Beach Boys, Yo La Tengo, Low, The Magnetic Fields, and The Microphones. No matter what influences they drew upon, Brigadoon proved that the sum was truly greater than its parts.

Where their previous releases hosted many guest players, Brigadoon featured only the multitalented core band of Nick Krgovich, Larissa Loyva, Justin Kellam, and Julia Chirka singing and playing all manner of instruments, from zither to drum machine to trumpet to handclaps. As such, Brigadoon was a kind of overdue debut of its own, and not only for Mint. The fully realized Ghost Pirates Without Heads was released only six months later, but ultimately proved to be the group's final work before heading their separate ways.

"If there is such a thing as a nationally representative response, P:ano is Canada's answer to The Fiery Furnaces." - Alan Ranta, TinyMixTapes

"These innocently amateurish Vancouver youngsters, led by 22-year-old songwriter Nick Krgovich, have pulled out all the indie pop stops on their third album, Brigadoon, which positively bursts with joy and candour over the course of its 22-song creative whirlwind." - Kevin Hainey, Exclaim!

"On the first few listens, the songs wash by, disembodied like an ocean. They pass over as a wave of ephemeral cleverness. Eventually strong, if eccentric, songwriting emerges..." - Marc Hogan, Pitchfork