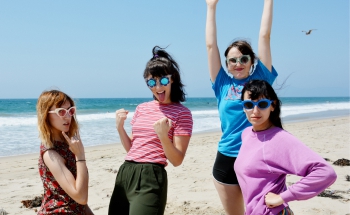 “Pitch Black”, the EPs opener, sets the tone with lyrics detailing stress and self-doubt. “Shine”, tackles the chaos and pain involved in loving someone struggling with addiction. “Rocky Mountains” describes trekking up steep mountains and being frozen and blinded by snow and ice. It quickly shifts from hard hitting drums and overdrive guitar, into dreamlike, shimmering vocals and chorus, and then back into a thick wall of distortion, featuring Hanlon animatedly chanting, shouting and screaming. The final track, “Drugstore’s Symbol of Happiness” is the most intimate and tranquil. Hanlon’s vocals about self-discovery and love are up close and quiet, soothing and serene.

On earlier material, Hanlon’s voice was passive, frequently inaudible and blanketed in reverb. Those days are gone; She now sings with confidence and clarity, demonstrating a refreshing assertiveness not seen before in her work. Which Witch holds the first glimpse of an evolution, a new stage in which Hanlon is finally no longer holding back.