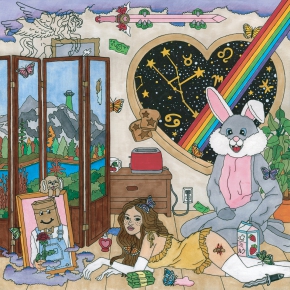 L.A.’s DIY sunshine punk favorites Peach Kelli Pop are back with Gentle Leader, the band’s 4th full length album and first in three years. Gentle Leader is a departure for Peach Kelli Pop’s founder, Allie Hanlon, demonstrating growth and a new confidence as a musician and songwriter. Following close on the tails of the band's recent EP, Which Witch, their first with renowned Canadian indie pop label Mint Records, the album captures the band at a crossroads exploring new ideas and complexity while maintaining their colorful energy.

Gentle Leader’s 10 tracks are inspired by a unique range of guitar driven power pop and feedback laden post-punk from the 80’s and 90’s. Unlike the band's past releases which were almost entirely written, recorded and produced by Hanlon, Gentle Leader is a collaborative effort. Hanlon shared production duties with engineer Roland Cosio who also played guitar on some of the songs. Sophie Negrini is also featured on guitar, while Andrew Bassett of Portland’s party-punk band The Mean Jeans provided the drumming. Gina Negrini, the band's bassist, contributed the song “Quiet” to the album. This new collaborative spirit works well, highlighting the strengths of each performer and creating a more sophisticated record without sacrificing Hanlon’s distinct vision.

Gentle Leader frequently jumps from distortion and hyperactivity into soft harmonies and tangible vulnerability. The exhilarating “Hello Kitty Knife” kicks the album off with a giddy urgency. Things take a turn with an intimate take on the UK indie-pop classic “Honey” by The Marine Girls. The unembellished vocals and shimmering guitars reflect the spirit of the 80s' DIY underground and are brought to light by the production values reminiscent of an early Violent Femmes album. “Black Magic” transports the listener to the moment one first realizes their relationship will soon end, capturing the distinct feeling of heartbreak and angst with its disorienting buzz saw guitar. The dreamy “Parasomnia” is hazy doo-wop drenched in layers of warped vintage Casio synth tones with Hanlon singing solemnly about the inconvenience of obsessive desire. Like a collection of short stories, each of the 10 tracks on Gentle Leader possesses its own background, narrative and unique charm.

Further evidence of the band’s evolution, Hanlon opted to retire the the classic layout featured on the band’s previous album covers. Gentle Leader features a fantastical illustration by Brooklyn artist Miza Coplin that captures the animated, abstract and vibrant world in which Peach Kelli Pop exists. Like an entry point to that world, lyrical references and themes from songs on Gentle Leader can be found in Coplin’s artwork.