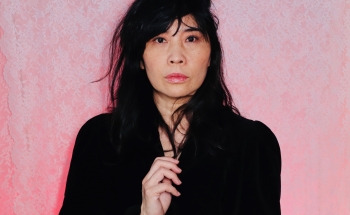 Originally from Vancouver, BC Sook-Yin was part of the cities alternative music scene with her group, Bob’s Your Uncle which released three albums between 1986 and 1993. In 1995, Lee moved to Toronto to become a VJ on Much Music and hosted the Wedge, in the process becoming an important figure in an iconic era of Canadian alternative music. After leaving Much Music in 2001 Lee acted on many films including The Art of Woo (2001), Hedwig and the Angry Inch (2001), Shortbus (2006) and directed two films; Year of the Carnivore (2009) and Octavio Is Dead! (2018).

Lee has continued to pursue music alongside her career in television and film including two solo albums in the 1990’s on Vancouver’s Zulu Records along with soundtracks for the films “Year of The Carnivore” and “Octavio is Dead”. In 2015, Lee released an album with her long time partner and collaborator Adam Litovitz under the name Jooj on Last Gang Records.