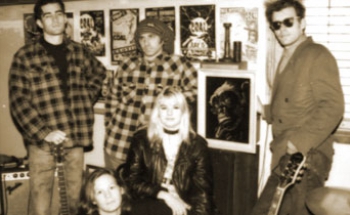 Self described as "dreamy, dark, western, goth pop", Coal was a prominent pop-noir figure in Vancouver in the early '90s. They appeared with Low, Oh Susanna, Veda Hille, Mae Moore, The Corn Sisters, The Inbreds, and countless others. However, eventually, like all good things, Coal came to an end. And that's not to say they went out in a fizzle; by that time, these cats had 3 albums, 6 videos, and plenty of compilations under their belts. One of which was with Minty friends cub, Windwalker, and Tankhog. It's a little 7" that is way out of print, so snap it up if you find a copy!