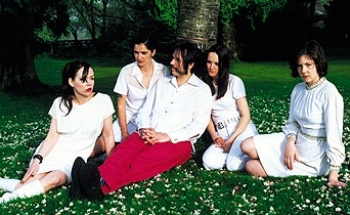 The Gay was formed in the summer of 2001 when Coco Culbertson asked some of her favourite musicians to form a supergroup. Having spent time playing with such Vancouver folks as Bif Naked and Holly McNarland, this was one lady who knew exactly what she wanted.

First to be approached was Maija Martin (accordian), Culbertson's partner-in-crime from Mint records' The Tennnessee Twin and the double-squeezebox powerhouse duo I, Mudder Accordian. Next to get Coco's nod was Tobey Black (guitar), firebrand leader of former cow-punk legends Maow, who was looking for a more appropriate vehicle for her new, more sensitive songs.

The fourth shoulder tapped was that of singer-songwriter Sara Lapsley (keyboards) from the irresistibly catchy Vancouver Nights and former leader of the always incendiary Kreviss. Last but, of course, not least was Keith Parry (drums) the rhythmic magician behind prog-grunge geniuses Superconductor who was also looking for a project to showcase his love for more orchestrated rock.

Indeed, listening to The Gay evokes memories of the great vocal-based bands of the '70s (Fleetwood Mac and Heart come immediately to mind), but why the high-school-sounding moniker? "We're already sick of talking about the name," snaps Tobey. Keith is even less diplomatic: "If you don't like it, fuck you, lady." Indeed.

The group's debut album You Know The Rules was produced by Kurt Dahle (New Pornographers). On its release in September of 2003, it received positive reviews from the likes of AllMusic, Dusted, Austin Chronicle, and more. However, like most super-groups, the lone formation of The Gay was short-lived, and though no official break-up was announced, its members have dispersed across the Canadian music scene. Coco Culbertson went on to form another indie super-group a couple years later, dubbed The Choir Practice.

"While the easiest reference point for the Gay’s sound may be the aforementioned Pornographers, they’re certainly not mere imitators: they inject a bit more of a sixties baroque-pop sound into the mix, and break from the traditional rock-band line up by featuring a full-time accordionist. The band’s lyrics may not have the literary panache characteristic of a Carl Newman or a Dan Bejar, but they’re a hell of a lot more intelligible. Pop fans aren’t necessarily looking to decipher oblique messages hidden within a candy coating, the Gay take heed of this fact, providing lyrics that are generally playful and straightforward without being frivolous." - Michael Cramer, Dusted