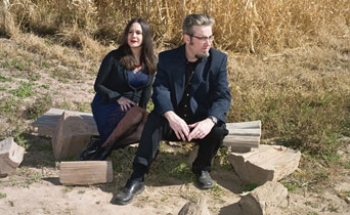 The Handsome Family consists of Brett Sparks (music) and Rennie Sparks (lyrics), who live in Albuquerque, New Mexico. They consider their songs Romantic in the 19th century sense of the word: full of an awed sense of emotion in the face of nature’s mysteries. They wrote their eighth CD, Honey Moon (released April 2009 to celebrate their twentieth year of marriage). Honey Moon takes place under bowed branches and deep within winding corn mazes. Lovers kiss in dripping wet caves and call to each other from trembling mountain peaks. They sigh on windy drawbridges and weep silver puddles in the street. Musically, the Brother duos of country (Delmore, Louvin, Monroe, Stanley, Everly) remain a big influence on Brett's use of harmony (as heard on Honey Moon's “When You Whispered”). In writing the songs for this album, African-American vocal groups like The Mills Brothers, The Inkspots, and The Platters became a primary motivating force. Several songs on Honey Moon ("The Loneliness of Magnets" and "Linger, Let Me Linger") explore the romanticism of Tin Pan Alley while "My Friend" is suffused with the spirit of Al Green. During Honey Moon's recording, Brett read the book, "The Beatles as Musicians" by Walter Everett, which proved to be a huge musical and recording/engineering inspiration.

The Handsome Family record all their songs in a converted garage studio at the back of their Albuquerque house. Their seventh CD, Last Days of Wonder (June 2006) earned the title of Mojo’s top ten American Albums for 2006 and was called “an unqualified triumph” by Uncut. Singing Bones, their sixth CD, left the UK’s Independent stating, “Rarely, even in the fatalistic world of country music, has the precarious mystery of mortality been captured with such poetic grace as on Singing Bones.”

The duo appeared in the movie, "I’m Your Man" (2005), a tribute to Leonard Cohen as well as "Searching for the Wrong-Eyed Jesus" (2004). In 2004, a reader's poll in Mojo named The Handsome Family's third CD, Through The Trees one of the ten essential Americana records. Their songs have been covered by many artists, most notably: Andrew Bird, Christy Moore, Cerys Matthews, The Sadies, and Sally Timms. Andrew Bird's version of their song "Don't Be Scared" was recently featured in the movie "The Promotion".

Touring extensively throughout the USA, Canada, Europe, Australia, and New Zealand, their live performances sometimes consist of up to a six-piece band and at other times of just Brett and Rennie.