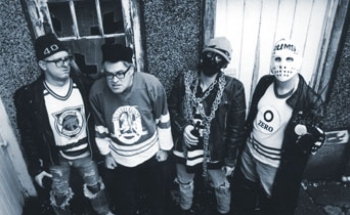 The Hanson Brothers is the puck digging, bench brawling alter-ego of Victoria, BC punk legends Nomeansno. A play off Black Flag's My War (as if I even need to tell you that), the Brothers' third full length, My Game, came out on Mint in 2002. If there was any doubt these underdogs could complete the hat trick given the impossibly high standards set by their previous releases, Gross Misconduct and Sudden Death, My Game sends them back to the minors.

In spring 2002, The Hanson Brothers embarked on a Canadian and Eurpoean tour. That time, they actually played some shows! On their previous European attempt, they were forced to leave the continent hurriedly following a disastrous incident in Bremen involving two Hanson Brothers and a vendor of melons. Fortunately, all criminal charges were dropped.

The Hanson Brothers are Johnny Hanson (vocals), Robbie Hanson, (bass), and Tommy Hanson (guitar), with long-time cousin Ernie behind the drums. Other brother, Kenny Hanson left the Hanson Brothers' drum kit to devote himself to his true passion: the theater. Kenny can be seen to this day in remote Canadian towns, touring his one man production of The Houston 500.

Johnny Hanson:
Vocals, free agent (pending trial), Born March 28, 1968, Itza Butte, Saskatchewan, 6 ft, 190 lbs. (aka John Wright, drummer with NoMeansNo)
Broke into the SOSHL with the Foam Lake Bullies in 1970. Inked first pro contract with the Attica Lifers in 1973. Led the AOKHL in penalty minutes 4 years straight. Suspended indefinitely for shooting pucks into the crowd during warm-up. When not carving his niche on the ice, Johnny's usually inscribing his initials in the bench in the penalty box. An avid sculptor.

Tommy Hanson:
Guitars, Kenora Cheeseheads, DUHHL, Born ?, showed up at the rink 1971, 6 ft, 195 lbs. (aka Tom Holliston, touring guitarist with NoMeansNo)
Last year's recipient of the Dennis Kearns Trophy for Surliness On and Off the Ice. Past winner of the Minnesota Sport Writers' Award for Testiness, garnered while toiling for the DT'SHL, Hibbings "My-sister's-not-marrying-one's". Voted "Player most likely to be traded" by teammates. Also noted for repugnant personal odours. Has never missed a game due to injury.

Robbie Hanson:
Bass, Fort McLeod Dust-ups, KGBHL, Born Feb. 23 and then again Mar 12, 1962, Offal Springs, Saskatchewan, 5 ft 11 in., 205 lbs. (aka Robbie Wright, bassist and vocalist with NoMeansNo)
First player ever penalized for garrotting the opposition. Hockey player come poet; Robbie has recently published the autobiographical tome, "My Career as a Scythe Wielding Psycho". Operates a mink farm in the off season. Enjoys jumping into the stands and beating heckling fans senseless with his goalie stick. A renaissance man.

Ernie Hanson:
Traps, chops, the Marathon Smell, BOHL, Born April 1, 1970, Lubbock, Texas, 5 ft 10 in., 210 lbs.
Strangely fixated on geese, Ernie migrated north early in puberty. Finally cracked the 4HHL's Flin Flon Flappers in 1985 and was promptly sent to the farm by management, not the farm team. Noted fowler, he has taken "trash talk" to new heights and is currently on retainer for a major waste-management consortium. Staunch advocate of KFC's original recipe.

"For 'years innumerable' I was a keen supporter of Mansfield FC. Then I heard My Game by The Hanson Brothers and I realised that my life up to this point was complete Rubbish! From now on it's Ice Hockey for me, Son. Brilliant!" - NME

"...while the Ramones were limited by their own talent shortcomings, the Hanson Bros. are not and in fact play this simple three chord punk with marvelous skill, adding a layer of depth where many bands are unable to tread." - Satan Stole My Teddybear

"They make the Ramones look like punk hacks..." - Music Emissions