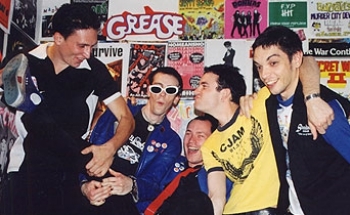 It's a shame, really, that the notorious late '70s punk band the Dead Boys permanently claimed the title "Young, Loud, And Snotty", because, really, it is the best possible description of what the New Town Animals stood for.

Hailing from Vancouver, and often buried under piles of vintage punk vinyl, New Town Animals were all about the youthful discovery of a sound many of us weren't around to enjoy the first time. NTA's influences included relative punk obscurities like the Toy Dolls, Stiff Little Fingers, and the Forgotten Rebels. It was said that New Town Animals were like a "junior Smugglers" (their veteran labelmates). Mint fans may recall seeing guitarist Jeff McCloy's unbridled energy destroying a bass guitar or two while subbing in for a rapidly aging bassist Beez on later Smugglers tours. However, NTA really had much more of a vintage Brit-punk sound. For once, that wasn't a fake "punk" accent. NTA lead singer Nick Newtown was originally from England.

New Town Animals were originally formed in 1998 from the ashes of punk rock bands Grave Mistake and Spleen by Nick Newtown, Stevie Kicks (bass), and Alex Angel (guitar) in the Vancouver suburb of Abbotsford. One year later, Chucky (drums) from Jetset and the aforementioned Jeff joined the group. As could be guessed, their live shows were punk rock thunder, as proven by their performances with the Forgotten Rebels, the Briefs, Supersuckers, Murder City Devils, the Makers, and the Smugglers.

Their self-titled debut 7'' was released in December of 2000. Both songs were recorded at Vancouver's rock 'n' roll hit factory, JC/DC, and engineered by John Collins (New Pornographers) and David Carswell (Smugglers). Their debut album Is Your Radio Active? was recorded by Jesse Gander at Ernie from Wrong recording artists Removal's studio, Big Midget. Local impressio Todd Simko did up the mastering together with Jesse.

Is Your Radio Active? was released in June, 2001. Positive reviews rolled in from the likes of PopMatters and Ink19, while the video for "Three Steps Backward" received regular play on Much Music. Shortly after the release of their debut, Bryce Dunn (also from The Smugglers) replaced Chucky on the drums until the band called it quits in 2003. Stevie Kicks went on to play with The Briefs, while Jeff and Bryce joined the Tranzmitors.

"New Town Animals disposes with two decades worth of musical progress since punk was new and (some say) pure." - Patrick Schabe, PopMatters

"New Town Animals may not have the genre-breaking innovation of a band like Idlewild, but they know their sources and do what they do well." - Charles Spano, AllMusic

"New Town Animals are way stoopid, and I wouldn't have it any other way." - Kurt Channing, Ink19