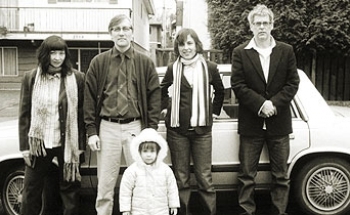 On the other side of the Mint musical spectrum but still sporting the JC/DC Studio's King Midas touch, comes a different kind of Vancouver all-star collaboration... Meet Volumizer!

First, there is Rodney Graham, former guitarist and songwriter for U-J3RK5 - the legendary Vancouver new wave band that had but one release in its short life (1980's self-titled EP) - and now a major visual artist. He plays guitar.

Then there is Bill Napier-Hemy. He was the guitarist and songwriter for the Pointed Sticks, another seminal Vancouver new wave/punk band, also known as the first Canadian band to sign to Stiff Records in the UK. He has undertaken numerous musical projects since, including a collaboration with Corsage's Phil Smith, and has been known to teach rock music at the Fraser Academy.

Former Dishrags member, Jade Blade was once the singer, guitarist, and songwriter for one of the first all-female punk bands in Canada.

Shannon Oksanen is the fourth member of the band, also a visual artist.

Together with drummer John Cody they've created a buzz-saw punk rock document that draws from their respective pasts and musical oeuvres.