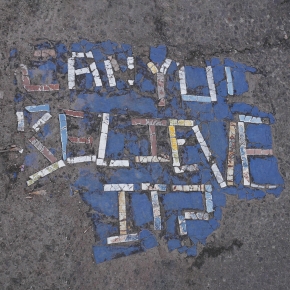 ‘My life: a slow clap progression, pace rising; to celebrate in the smallest finding - feels right to show admiration that grows,’ Mark Grundy begins on “Slow Clap”, the first track from Heaven For Real’s sophomore full-length Energy Bar. Formed in 2012, and consisting of songwriter twins Mark and J. Scott Grundy (Quaker Parents) and their frequent collaborators, drummer Nathan Doucet and synth player/percussionist Cher Hann, the Toronto by way of Halifax project has been taking time to shape the follow-up to their 2016 Mint debut, Kill Your Memory. Springboarding from their early 2022 EP, Sweet Rose Green Winter Desk Top Tell This Side Autumn Of The Fighter Hot In A Cool Way, they describe the project as a “living collaboration”, one that strives to compress life’s truths into a distorted reflection of all of its facets. It’s this that drives Energy Bar – a hyper, trash-compacted mosaic of the band ten years in that’s simultaneously dreamlike and alive.