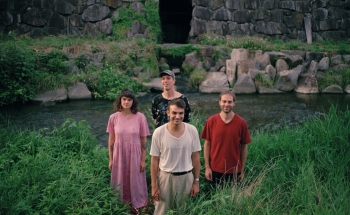 Heaven For Real are striving for reality. That is, the way light hits your eyes in the fraction of a second that it does, letting you experience meaning that is always in motion. Heaven For Real linger there, unfolding some minuscule truth not in search of revelation but simply to let it breathe.

The Toronto by way of Halifax, Nova Scotia project is formed around the nucleus of twins Mark and J. Scott Grundy (Quaker Parents). Since 2012, the back-and-forth between Mark’s evocative lyric-driven songwriting and Scott’s musically expressive instincts has breathed a precious life into Heaven For Real. Completed by drummer Nathan Doucet (Aquakultre) and synth player Cher Hann, the band soon became one of Halifax’s most exciting musical prospects, a position they solidified with 2016’s debut album Kill Your Memory and tours of North America and Japan.

Their sound is most simply described as art rock, but more accurately described as post-punk unravelled with one tug of a thread to reveal an internal pool of psych, jazz, ambient, electronica and Britpop. “I could see us veering in a million different directions, ” Mark explains. “[But] we’re using guitar rock as something of a palette to draw from, dig into, a lane to drive in. This is where we're at (for now).”