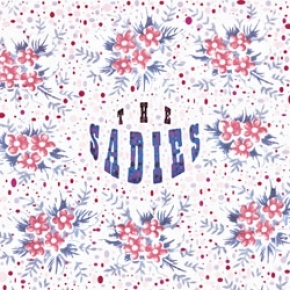 The Sadies occupy a unique position in present-day music: seemingly everybody loves them. Whether it be at a drunken Toronto boozecan on a frozen winter night, a sweat-soaked bar on a blistering Tucson afternoon in August, or an out-of-control brouhaha on Chicago's Wabansia Avenue, The Sadies achieve that rarest of feats: polarizing crowds, but only in one direction.

Brothers Dallas and Travis Good, Sean Dean, and Mike Belitzky have graced good ol' Mint Records with a second seven-inch single (their first: "Cork and Monkey" b/w "Village Of Horseheads" and "The Curdled Journey"), only this time it's sung all in French! Not that either of the Good brothers is fluent in the language of, er, love, but that doesn't stop Dallas from getting an A for Effort as the band tackles "I Tried Not To" (or rather "J'ai Essayé De Ne Pas" en français) from the 1999 Bloodshot album Pure Diamond Gold, and "The Last Of The Good" ("Le Dernier Du Bon") from 2001's Tremendous Efforts, all to glorious, humourous effect and grounded by The Sadies' trademark Ennio Morricone meets Calexico meets Stanley Brothers meets Dick Dale sonic energy.