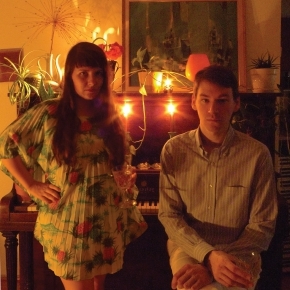 New Dimensional is the duo’s primordial ooze, cramming 10 songs into a jam-stacked 13 minutes and two sides of a 7”. Like Robert Pollard in quick-hitter mode or a circuit-fried Bruce Haack and Esther Nelson, the pair creates way-out musical miniatures. Energy Slime’s enchanting earworms range from the fuzzed-out glam stomp of “Bustin’ Up” to the stately Eno pomp of “Mother Brother Sister Father”. The breezy blue sky-ride of “Only Clouds” crash lands on the space cruise of “Star On The Ground,” after a 34-second huff of “Gas In A Bag”. Delisle grabs the mic for the shimmering Cyndi Lauper sock-hop of “Cool Ship II” while Arner shares his medical credentials with the feather-banged headbang of “Why U Wanna”. Road trippin’ ramble-riffs follow “Trial Of The Mind” onto the rattling trail of “So Long Snakes”. And the crown-jeweled centerpiece is a lascivious tribute to one half of Stop Podcasting Yourselftitled (’natch) “Graham Fucks The Queen”.

“Basically Jay and I will be having a few alcoholic beverages after dinner and watching TV,” explains Delisle on the project’s streaming consciousness. “Jay will say ‘pass me my sketchbook’ and then he’ll write down some psychedelic lyrics. We have a lot of fancy recording equipment like my 100-year-old piano, about seven synthesizers, guitars, etc. all crammed in our tiny studio apartment. Quite often the songs are recorded immediately after Jay has an idea. Each song takes maybe an hour or two to write, record, and mix. Then we listen to it a bunch and laugh and quote all the lyrics to one another for the next week or two until we make the next song.”

In the midst of a tireless touring schedule for their primary guise, Energy Slime sprung forth from the duo’s moonlight desires to get weird. Bustin’ up and out of their comfort zones, these impulse-driven sessions saw them swapping instruments and slathering on gooey overdubs to send pop songs into uncharted dimensions. Now that it’s ready to be dumped on the world’s head à la You Can’t Do That On Television, Delisle and Arner have taken on an even more secret pseudonym as the outlet to their outlet.

“The side project of Energy Slime is called Hard Piss,” she explains. “Jay wrote me a song for my birthday last year called ‘Hard Piss Highway’ about touring across the country. We once played that song at a Jay Arner show in a burrito restaurant. Having a project where you're not trying to be good frees you up to be good, paradoxically.”