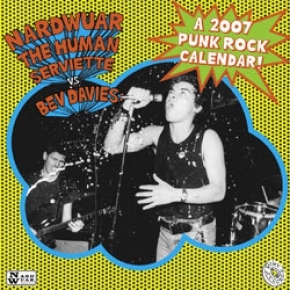 There are few photographers in this wonderful world who have taken pictures of both '60s garage punk legends The Barbarians and hardcore heroes The Dead Kennedys. In fact, I challenge you to find one! And if you did, it would be Vancouver, BC, Canada's Bev Davies.

I first met Bev at Joey Shithead (of D.O.A.)'s annual "garage sale" where she was selling some of her photos on his lawn. As I gawked at her pointed portraits of The Pointed Sticks, The Slits, Black Flag, and The Rolling Stones, fascinating tales of the punk and the non-punk rawkin' variety soon emerged. From Bev's early years growing up in Toronto, Ontario (I was astonished to find out that Bev almost went to California with Neil Young on his famous hearse ride to hell!), to her subsequent relocation to Vancouver, BC, where she basically, from the late '70s to mid-'80s, shot everything that moved, the stories she told were so cool! Whether joining D.O.A. on many of their ground-breaking tours, flying to US Festival, or talking to John Lennon on the phone, this had to be documented! Not that it hadn't: Bev worked for a few years at Vancouver's news and entertainment weekly, Georgia Straight, and was a contributor to Slash, Damaged, and tons of other fanzines. Nevertheless, I craved more. Hmmmm... Why not, with the help of Mint Records, create a 2007 Punk Punk Rock Calendar to help quell my photographic fantasies? Yeah!

Now, please view this calendar not as the final word on Bev's pics, but as the first step in the examination of one of the great chroniclers of our generation. Bev's photos help document the famous and unknown rock 'n' rollers of the 20th century, and without a doubt, combined with her amazing stories, provide a valuable resource for even the "casual" musicologist. But Bev's photos ain't for museums, they're for you and your wall!

Keep on rawkin' in the free world!

Have a good tea!