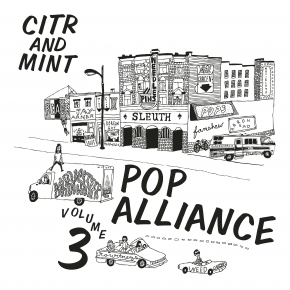 To carry on the Pop Alliance tradition, we called upon CiTR’s Duncan McHugh (aka: the host of Duncan’s Donuts) to bring together 14 of Vancouver's finest including Jay Arner, Movieland, Korean Gut (RIP), Peace and more. Many songs are un-released and once again, all proceeds will go back to CiTR 101.9 - the birthplace of Mint Records!

Only 300 of these waxy gems will be pressed, carefully silkscreened by the station's volunteers and numbered by hand. You can get one by donating to the station during their upcoming funding drive (Feb 28 - Mar 8), pre-ordering the release from us, or waiting for the record to hit record store shelves on Tuesday March 5th, 2013.

To unleash this record in style, we're rounding up as many of the bands on the comp as possible (the lineup is currently TBD) and taking over Chapel Arts (304 Dunlevy at Hastings) for an evening. This time, we're setting up not one, but two stages. Mark Friday, March 8th on your calendar, it's going to be swell!

Movieland: Movieland is Alie, Selina, Adrienne and Davina. They take turns writing their own songs.“1-2-3-4 Get Fucked” comes from their so-to-be released debut on Green Burrito Records. It was mixed and recorded by Mr. Jay Arner.

Jay Arner: Jay Arner is the multitalented man-about-town who co-recorded the new Apollo Ghosts record and contributes to bands including Fine Mist, Bleating Hearts and Gal Gracen. He was kind enough to produce several songs on this compilation and mastered the release too. His upcoming TBD solo project is something you should probably look out for!

Gal Gracen: Patrick Geraghty, of Role Mach (you may remember him from Vol 2 of The Pop Alliance collection), calls his newest band Gal Gracen and his live band features Adrian from Apollo Ghosts as well as Jay Arner.

Fanshaw: Olivia Fetherstonhaugh aka Fanshaw is known for taking her time with songwriting. This is the first song that has surfaced since her Dark Eyes debut. After listening to this and her previous release, we’ll be right here, patiently waiting to see what she does next.

Babysitter: "Victoria B.C.’s Babysitter are a savvy bunch of garage gourmets whose love of lo-fi and d.i.y. decor is honest and appealing." – Discorder

We should also mention, “Be Cool” is an outtake from their 2012 full-length debut called Eye (Psychic Handshake).