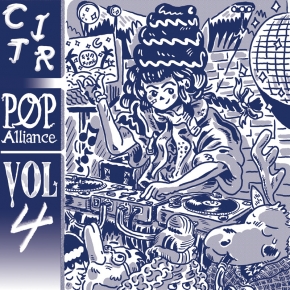 Spring approaches, breathing new life into the Canadian landscape. Across a clearing in the woods, a miraculous sight: CiTR Pop Alliance Compilation, Volume 4!

Mint Records and CiTR 101.9FM have partnered up once again to release the fourth edition of this compilation series, with eleven songs from Vancouver’s freshest acts. The record arrives just in time to raise funds for the local campus and community radio station as part of their annual Fundrive, which runs from February 25 to March 4. It’s the newest chapter in a lengthy story of partnership between Mint and CiTR.

Side A opens with Ora Cogan’s surreal “Move,” from her acclaimed EP Crystallize (Hidden City). Track two’s a retro thrill from the The Shilohs, “Do the Modern,” off of their upcoming tape Empress Stars (Light Organ). The rest of Side A charts an excited path through Vancouver post-punk: with exclusive tracks from Genderdog (RIP) and newly-formed trio Jerk Jails, along with Poor Form’s 2014 single “July.” It fades out with a special treat: Cult Babies’ tribute to Lauren Smith of Tough Age, “Sister Thirteen,” exclusive to Pop Alliance Vol. 4.

Side B expands the boundaries of pop further, opening with two haunting electronic-experimental melanges: Mourning Coup’s “Burn One for the Saints” from Baby Blue (No Sun), and Stefana Fratila’s “Homeland” off of Efemera (Trippy Cool). Two ecstatic meshes of indie rock and shoegaze noise follow with Late Spring’s “Drink You,” from their 2015 debut, and an exclusive track from Ace Martens, “Hiding.” Closing out the fourth Pop Alliance is a meditation from minimalviolence, the exclusive track “Body as Landscape.”

Late Spring is an art rock band from Vancouver, Canada. They frankenstein together psych/surf, grunge, and noise influences. “Drink You” is o their debut self-titled Late Spring EP (self-released April 2015).