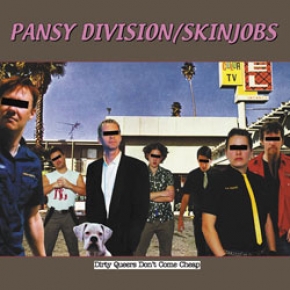 Two songs each from the pride of San Francisco, and the pride of Vancouver, BC! Pansy Division are American pop-punk legends, having been around since before the Green Day-on-Lookout years. With countless albums under their belt including Pileup, Undressed, and Wish I’d Taken Pictures (a Mint/Lookout co-release), Pansy Division were perhaps one of the most successful and definitely the most visible queer-friendly banner bearers in nascent punk circles. And on Dirty Queers Don't Come Cheap they not so much passed on that torch but rather lit another one, to the then-rising Canadian band, the Skinjobs.

With Kim Kinakin from famed Vancouver hardcore band Sparkmarker on guitar and lead vocals, and ex-Queasy member Laura on drums, and Mimi on bass, Dirty Queers Don't Come Cheap sees the Skinjobs draw on both the hardcore of Sparkmarker and the pop-punkiness of Pansy Division to create their own brand of queercore.