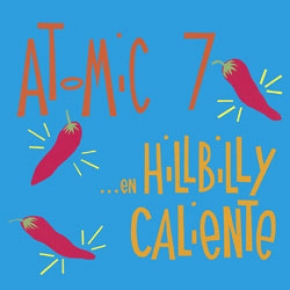 Former Shadowy Men On A Shadowy Planet and Heatseekers guitarist Brian Connelly proved he was just as hot and shadowy as ever with the sophomore album from his Atomic 7 project. En Hillbilly Caliente saw Connelly leading drummer Mike Andriosso and electric bassist Mandi Bird [who took over from upright bassist Clinton Ryder between albums] through another heavy dose of 16 swanky, strutting rock tunes infused with swing, surf, country, and rockabilly. Care of Brian's Gretsch White Falcon, whose heavy use provided this record a character distinct from previous projects, the album spiritually followed in the great tradition of legendary instrumentalists Dick Dale, The Tornados, Link Wray, Les Paul, and The Ventures. If nothing else, the cheeky ode "What I Liked About Lord Of The Rings" is guaranteed to make you smile.

Atomic 7 come up with 17 different ways to slice the guitar-bass-drums pie, each one sounding distinctive yet hauntingly familiar. - Ink19

Connelly's managed to coax out the intricate guitar nuances he needs to distinguish between the staggering variety of genres, and the thoughtful production, phrasing and dynamics make the tunes speak volumes more than most lyrics-based pop songs. - Now, Toronto