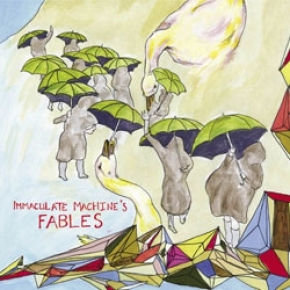 These are clever, whip-smart pop tunes performed with exemplary craft and a joy that keeps the slicker moments from ever sounding formulaic. - AllMusic

Immaculate Machine was an indie-rock band that lived on an island. In order to be able to travel freely to and from their geographically isolated homeland, they made a rock album. This album is called Immaculate Machine's Fables. It is a series of vignettes about travelling. It was made with the help of esteemed colleagues such as producers Colin Stewart (Black Mountain, Pretty Girls Make Graves) and John Collins & Dave Carswell (New Pornographers, Tegan & Sara), violinist Owen Pallett (Final Fantasy, Arcade Fire), and back-up vocalists Alex Kapranos (Franz Ferdinand) and The Cribs.