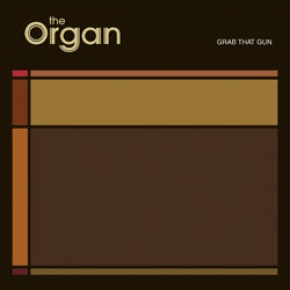 Having developed a strong following locally and across Canada on the strength of their debut 2002 release Sinking Hearts, Vancouver's The Organ spent much of 2003/04 busy recording their debut album for Mint/604 Records. Based around the warm and melancholic tones of Jenny's Hammond organ, along with Katie’s Morrissey-meets-Alison Moyet-esque vocals, and Deb's guitar that alludes to Johnny Marr perhaps, the band's music has been described as "haunting and intense." Sadly, the brilliant pop melodies were extenguished even though they had really began and Grab That Gun marks the all-too-early end of one of Vancouver's most promising bands of the early aughts.

Grab That Gun proves that the band has plenty of room for expression within its rather limited palette of droning organs, succinct drumming and sharp, upturned guitar lines that give new meaning to the term "hook." While this sound comes from the legacy of '80s college rock -- at times suggesting a fusion of the Smiths' witty, bouncy melancholy and the on-the-sleeve passion of Throwing Muses -- and also has ties to some of the other bands remaking new wave and post-punk in their own images, the Organ and Grab That Gun have a freshness that isn't often heard in any kind of rock music. - allmusic

You know those albums that eliminate all traces of doubt from your mind within the first few bars? The Strokes' Is This It was one. So was Editors' The Back Room, and Arcade Fire's Funeral. The Organ's debut effort Grab That Gun can now be added to that exclusive list - make a note of it. - MusicOMH

... the combination of defiant but despairing lyrics and simple melodic verve pushes The Organ over the thin line that separates the inspired from the derivative. - BBC