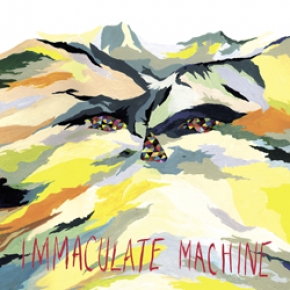 High on Jackson Hill proves, not only is this band capable of pulling off any style they want to try, but they do so with good taste and undeniable charm. - PopMatters

High On Jackson Hill is the final release from Victoria's Immaculate Machine. Following up the critically acclaimed Mint Records release Fables, Immaculate Machine took a different approach to the recording of their fourth full-length outing. Trading in the recording studio in favour of recording sessions in songwriter Brooke Gallupe's parents' empty house, these sessions were captured by Colin Stewart from the Hive Studios (Black Mountain, Destroyer, Cave Singers). Instead of being meticulously polished in the studio, these songs were hammered out on the spot. No idea was too stupid to try in this creative environment and these ideas are audible on the album: car engines revving, doors slamming, pots and pans used as percussion and a chorus of singers plugging their noses.

High On Jackson Hill is a realization of Brooke Gallupe's sheer song writing talent and pop musical prowess where he affirms his position as a singer and a songwriter in his own right. The Victoria, BC artist is a fearless musical virtuoso, a kid who joined his first rock band at age eleven with no clue how to play the guitar but soloing away anyway. Through his teens he remained fully ambitious, training for years as an opera singer and a jazz guitarist while playing in punk and soul bands, eventually forming Immaculate Machine in 2001 with high school friends Kathryn Calder and Luke Kozlowski.

The band went through a number of lineup and role changes while recording High on Jackson Hill, however. Longtime drummer Luke Kozlowski (Drums, Vocals) retired and Kathryn Calder (Vocals, Keyboards) began to focus on her work with The New Pornographers. While Kathryn's contributions can be heard throughout the record, these developments cleared the path for Gallupe to create the Immaculate Machine album he always wanted to make, blending all of his musical ambitions, talents and interests.

Two EPs and three full length albums later, High On Jackson Hill sees the band in a more relaxed and spontaneous light. "Thank Me For It Later" and "He's A Biter" blend T-Rex influenced riffs with laid back, yet playful and glammy vocals while a more folkier sound appears on the melodic ballads "And It Was" and "You Destroyer". Marek Tyler (Meatdraw) also joined the band for the sessions, adding his distinct drum sound and percussive textures with bongos, shaker, chains, buckets and backwards cymbals. Originally written for Gallupe's other band, Rugged Uncle, "Primary Colours" is released here in re-worked form. As some of their final recordings, these twelve inspired songs took Immaculate Machine's sound to a new level of melodic and cohesive complexity.