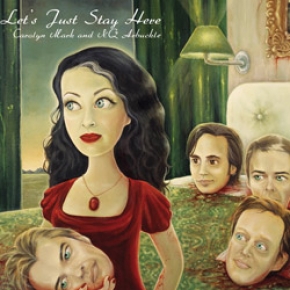 Sometimes you have to ask yourself, "am I a team player?" and/or "do I play well with others?"  Whether you like it or not, these are important things to know about yourself.  Sure, you can go with the whole "Lone Wolf" thing but that only really works if you are a Traveling Salesman or a Rogue Cop or a Serial Killer.  If you are, say, a Musician, "an ability to get along with people" is probably a good thing to have on your resume.

Carolyn Mark and NQ Arbuckle are cooperators, consensus builders, confederates and... collaborators.  They both know that, if you choose to walk the path of the itinerant musician, there's a helluva lotta road and precious few kindred souls.  Which makes finding someone you can make music with that much more exciting... even if you have to trek all the way from Victoria, B.C. (home base of Carolyn) to Toronto (home base of NQ Arbuckle) to do it.

In interest of full disclosure, Let's Just Stay Here is not the first time that Carolyn Mark and NQ Arbuckle have recorded together.  Perhaps it was a harbinger of things to come, but back in 2005 they recorded the track, "Fireworks", for another of Carolyn's collective recording projects, Just Married: An Album of Duets.  They were not alone in noticing that there was some, for lack of a better word, "magic" there (which illustrates an interesting facet of cooperation, sometimes 1+1 can equal infinity).  So, like Gretzky and Kurri, Burns and Allen, Peanut Butter and Jelly, they decided to take this winning combo and head for the Big Time.

Joining the team for this outing were some of NQ Arbuckle's favourite co-conspirators (aka his band) including The Kesper Twins, Peter (guitars) and Mark (drums) as well as John Dinsmore (bass, wine glasses, charm)...  plus, they got some some special guest action from Corb Lund (mandolin), Lily Fawn (musical saw), Jenny Whiteley (harmonies) and Miranda Mullholland (violin).  All together... about as good a team as you could hope to find.

And, Let's Just Stay Here is what teamwork is all about.  Of the 12 songs, 6 are originals by Carolyn Mark, 3 are originals by NQ Arbuckle and remaining 3 are hand picked cover songs chosen for the important places they occupy in each musician's personal cosmology... or maybe just because they like them.  Anyway.  "Downtime" was written by Edmonton's Mike McDonald, formerly of Roots Rock stalwarts, Jr. Gone Wild, and the man at least partially responsible for Carolyn choosing to become a professional musician rather than {shudder} an actress .  "Too Sober to Sleep" is by NQ Arbuckle's good friend (and Toronto's secret pride and joy) Justin Rutledge.  And, "Passing Dream" was written by Tony Evans, who fronted one of the first bands The Kesper Twins were ever in, Growler.

So sit on down an enjoy an album that is all about playing well together, and reflect upon how much more fun things are when you have a partner in crime.