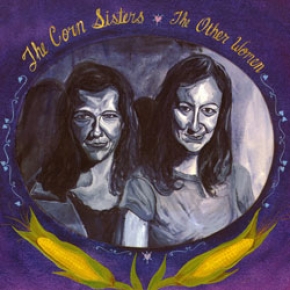 The Corn Sisters are Neko Case on drums and Carolyn Mark on guitar - and both on stomping board. By the time this release rolled around, they'd been performing as a twosome off and on for several years, basically whenever their respective solo careers (Neko with her Boyfriends, and Carolyn with her Room-mates) provide a brief opportunity to do so. A while back this dynamic duo belted out some magical live recordings over a couple of nights at Hattie's Hat, a cozy, country-fried coffee shop in Seattle, WA, and this is the result: The Other Women. Equal parts Neko and Carolyn, melody and laughter, Hee-Haw and yee-haw, this is a raw, off-the-cuff gem, and a modern-day revival of the good, old-timey hootenanny.

In their alter egos as the Corn Sisters, Neko Case and Carolyn Mark have been belting out boozy, honky-tonk country harmonies for years. This disc captures the pair in a rambling, pleasingly loose set of originals and covers performed in a Seattle coffeehouse over two nights in 1998. With their cross-cutting colliding vocals, Mark and Case conjure a brand of country far removed from the corporate facsimile that’s made millionaires out of high-hatted blowhards. Armed with barely more than acoustic guitar and the mere suggestion of snare drum to supply the instrumental back-up, the women rely on their sweet-and-sour voices and storytelling gifts. Adultery, jealousy, and smashed-up romance are the order of the day, and both singers move from bitter to mischievous to just plain sad with ease and conviction. Mark’s cautionary opener, “Too Many Pills”, stands tall alongside Loretta Lynn’s move-it-or-lose-it “Fist City”. And Case’s jaunty “High on Cruel” makes a nice counterpart to slower-paced weepers like Penny Jay Moyer’s hymnal “Don’t Let Me Cross Over” and Nick Lowe’s “Endless Grey Ribbon”. Save your biggest shot of bourbon for the exquisitely mournful gender-twisting take on “Long Black Veil”. - Portland Phoenix