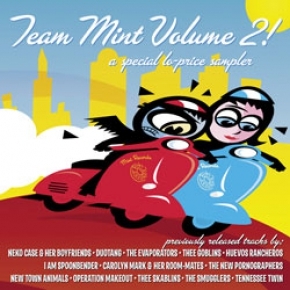 This is not your average compilation. When it came time to celebrate Mint's first decade in the biz, label samplers were all the rage. They rang in their first five years the same way, so Volume 2 focuses on the period where Mint flourished from a basement operation run by two college radio geeks to become one of Canada's most important independent labels. These were the years when The New Pornographers became one of the world's most-watched indie bands, when future CBC Radio 3 personality Grant Lawrence's band The Smugglers were at their creative peak, when The Evaporators lead singer/keyboardist Nardwuar the Human Serviette became a household name, and when eventual Juno nominee Carolyn Mark and top 10 Billboard artist Neko Case became the darlings of alternative country. Indeed, several of their best works are collected here, among other signposts on Mint's journey. This is the best kind of time capsule, capturing all the treasures of an era with no digging required.

"Since first earning notice for launching the career of cuddlecore icons Cub, Vancouver-based Mint Records has combed the local music scene to quietly but consistently build one of the most rewarding catalogs and rosters on the contemporary indie scene, finally gaining widespread acclaim in 2000 with arguably its best record to date, the New Pornographers' pop masterpiece, Mass Romantic." - allmusic

"Give me some ointment! I need an appointment!! Coz from one of the coolest labels (Mint Records) from out of one of the very coolest countries ever (O Canada!) comes this 23-song, 72-minute sampler guaranteed to make you ask yourself, at least a dozen or so times, "Hey! How come I haven't got THIS band's stuff yet?" (as only the best of samplers ever really should)." - In Music We Trust