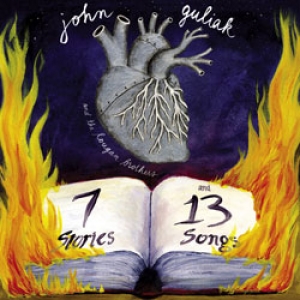 We asked John for some thoughts on his sophomore album, 7 Stories and 13 Songs. Apparently, "The Little Ease" is about a torture device in which its prisoners can never extend their limbs. "Windigo" was inspired by the story of Jack and Joseph Fiddler, and a brief sanity holiday John took in Toronto. "Oka/Banff" is something that just struck John while traveling. "Easy to Fail" is real inspiration. Emily Dickens saying something like "Hope is a feathered thing" is behind "Feathers for a Fool" and "High." Being lucky enough to have had the opportunity to canoe in northern Manitoba gave John eyes for all kinds of things and "Dive." Rudy is a character John invented to carry out all those tragic and beautiful adventures John couldn't always attend to himself, hence "Rudy Falling."

[T]he former Vancouverite (now living in Edmonton) doesn't make one misstep in his continuing efforts to document the troubles and travels of his working-class heroes. - The Georgia Straight