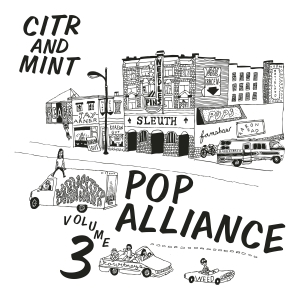 Hand assembled and silkscreened by the people of Mint and CiTR, this 180 gram vinyl comes with an informative booklet and free download! Only 300 copies ever made.

Remember that time we got really high off of paint fumes while silkscreening Mint/CiTR Pop Alliance LP covers? Well, we went ahead and did it all over again! (Only this time with the windows open).

To carry on the Pop Alliance tradition, we called upon CiTR’s Duncan McHugh (aka: the host of Duncan’s Donuts) to bring together 14 of Vancouver's finest including Jay Arner, Movieland, Korean Gut (RIP), Peace and more. Many songs are un-released and once again, all proceeds go back to CiTR 101.9 - the birthplace of Mint Records!

Movieland: Movieland is Alie, Selina, Adrienne and Davina. They take turns writing their own songs.“1-2-3-4 Get Fucked” comes from their soon-to-be released debut on Green Burrito Records. It was mixed and recorded by Mr. Jay Arner.

Jay Arner: Jay Arner is the multitalented man-about-town who co-recorded the new Apollo Ghosts record and contributes to bands including Fine Mist, Bleating Hearts and Gal Gracen. He was kind enough to produce several songs on this compilation and mastered the release too.

Gal Gracen: Patrick Geraghty, of Role Mach (you may remember him from Volume 2 of The Pop Alliance collection), calls his newest band Gal Gracen and features Adrian from Apollo Ghosts as well as Jay Arner.

Fanshaw: Olivia Fetherstonhaugh aka Fanshaw is known for taking her time with songwriting. This was the first song to surface following her Dark Eyes debut. After listening to it, we’re still here, patiently waiting to see what she does next.

Babysitter: “Be Cool” is an outtake from their 2012 full-length debut called Eye (Psychic Handshake).

"Victoria B.C.’s Babysitter are a savvy bunch of garage gourmets whose love of lo-fi and d.i.y. decor is honest and appealing." – Discorder