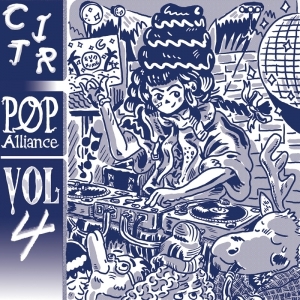 We're super excited that Vancouver campus radio station CiTR 101.9FM and Mint Records have teamed up once again to release the fourth installment of the Pop Alliance series!! Showcasing the city’s dynamic local music scene, 11 Vancouver bands, including The Shilohs, Ora Cogan, Mourning Coup, Stefana Fratila, and more have been enlisted to fill the album’s waxy grooves. This compilation arrives just in time to raise funds for local campus/community radio station CiTR, as part of their annual Fundrive, which runs from February 25 to March 4.

For this compilation, Duncan McHugh of Duncan’s Donuts enlisted a team of CiTR DJs—Andy Resto (The Burrow), Eleanor Wearing (Femconcept), Erik Coates (A Face for Radio), Nellie Stark (The Cat’s Pajams), and Nicholas Wang-Tretiak (Muzak for the Observant)—to collect the newest highlights of Vancouver’s independent music community. He even called this his dream team of CiTR DJs!

Don’t skip on the physical copy of this album because it includes two tracks from The Shilohs and Ora Cogan you won't find in the digital download. Plus the album was mastered by our good pal Jay Arner. Not to mention the inimitable cover art from Robert Ondzik, which you need to see in it's 12x12" glory.

Late Spring is an art rock band from Vancouver, Canada. They frankenstein together psych/surf, grunge, and noise influences. “Drink You” is off their debut self-titled Late Spring EP (self-released April 2015).