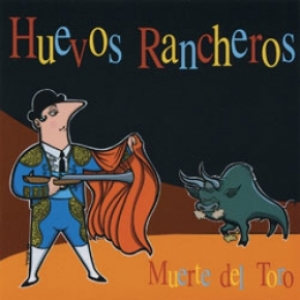 Recorded at Sundae Sound in Calgary, Alberta, with Dave Alcock of Chixdiggit fame once again twiddling the Ranchero knobs, Muerte Del Toro is their fourth long player, and their third on Mint Records! And to add to their famed guitar-bass-drums wordless frontal assault, Huevos Rancheros have tossed some well-placed keyboards and organ in to the mix too! Tracks include a re-do of the acclaimed "Wild Turkey Surprise" that originally appeared on Huevos Rancheros' summertime '99 single that was released to coincide with their tour with Reverend Horton Heat. Artwork? Done up by — who else?! — graphic artist extraordinaire, Captain Tom Bagley!