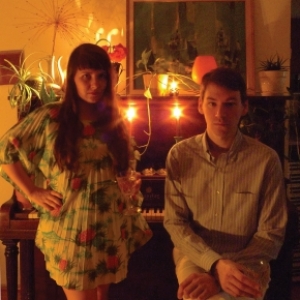 New Dimensional is the duo’s primordial ooze, cramming 10 songs into a jam-stacked 13 minutes and two sides of a 7”. Like Robert Pollard in quick-hitter mode or a circuit-fried Bruce Haack and Esther Nelson, the pair creates way-out musical miniatures. Energy Slime’s enchanting earworms range from the fuzzed-out glam stomp of “Bustin’ Up” to the stately Eno pomp of “Mother Brother Sister Father”. The breezy blue sky-ride of “Only Clouds” crash lands on the space cruise of “Star On The Ground,” after a 34-second huff of “Gas In A Bag”. Delisle grabs the mic for the shimmering Cyndi Lauper sock-hop of “Cool Ship II” while Arner shares his medical credentials with the feather-banged headbang of “Why U Wanna”. Road trippin’ ramble-riffs follow “Trial Of The Mind” onto the rattling trail of “So Long Snakes”. And the crown-jeweled centerpiece is a lascivious tribute to one half of Stop Podcasting Yourself titled (’natch) “Graham Fucks The Queen”.