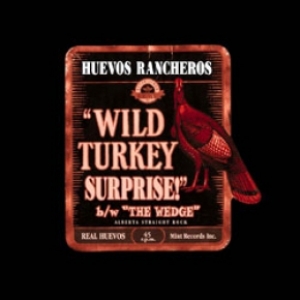 Hatched to coincide roughly with Huevos Rancheros' cross-Canada tour with Reverend Horton Heat, this plastic platter is straight Alberta rock. The A-side, a chunky three minute-plus raunch 'n' roll number, has got instrumental AC/DC written all over it. The tune starts out hard and mean and fast, gains momentum like an Alberta thunderstorm, and comes crashing to a halt just before it does irreparable damage to your needle. Over on the flip, Huevos Rancheros rock to their roots on "The Wedge," a middle-eastern flavoured Dick Dale rave up perfectly suited for a 7" B-side. Here Huevos guitarist Brent Cooper mightily confirms a theory one may have easily formed while listening to the A-side: Brent Cooper was Canada's best rock 'n' roll guitarist of the era. With the backing of Cantankerous Tom Kennedy on bass and Richie Ranchero on drums, this record is a two song stomp that's as razor sharp as rock 'n' roll can get.