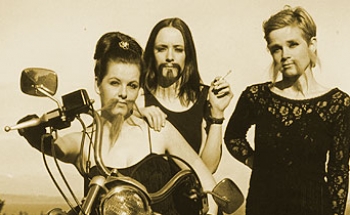 Although they haven't played a show in over a decade, we've remastered and rereleased Maow's Unforgiving Sounds back into the wild record store habitat. Why, because we here at Mint are kitchy nostalgic rascals. We hope you are too. Oh, and here's something else we discovered in the Minty vaults:

I am Mrs. Corrina Beesley-Hammond, the bass player in MAOW. I am also a newly wed. I have a very cool Fender Musicmaster bass which was previously owned by a Grape Of Wrath. I love to rock and I love to box. I am still trying to incorporate boxing into our live show because, quite frankly, there are a lot of assholes out there. If I were Prime Minister I would allow everyone to kill once. It would be like a get out of jail free card. Of course, if I were allowed to kill, I wouldn't be married today.

One of the reasons I like being in MAOW is because of the fun we have creating new looks. Given that I work with two very talented ladies, we are always making cooler and funner costumes for every show.

When I am not Maowing, I work on commercial and film sets, doing construction, painting, and decorating. I recently learned how to use a chainsaw.

On a more personal note, sometimes I drink too much at parties. If you see me drinking on tour, would you please suggest that I stop?

PS. I do not party on drugs but I am medicated.

I am Tobey Lafitte Black, guitar player and egoist of MAOW. What is it about me that makes me so wonderful? Well, maybe it's the combination of a full-blooded American mother, a Scottish-American father and being born in New Westminster, BC, Canada that created such an amazing combination.

How did I end up in MAOW you ask?

You may look at the members of Maow and see three completely different people, but that's what makes us great. I suppose that I haven't really explained why I'm such a wonderful person, but I've never been one for answering my thesis. You're just going to have to take my word for it, or come talk to me after one of our 'rockin' shows.

Hi. My name is Neko Case. I'm the drummer and sometimes singer for MAOW. I was born in Alexandria, Virginia and raised in Tacoma, Washinton (the state, NOT DC) and now I live in Vancouver, BC. Besides playing in Maow I go to art school (although I myself am not arty and I find the experience overrated and taxing - CC will tell you the same thing).

I started playing in a band as an outlet for my hyperactivity (for which I currently take Ritalin). I've been in a total of four bands counting Maow. In chronological order they are The Del Logs, The Propanes, Maow, and The Weasles. The Weasles are my other current project - we are a country music super group. We don't approve of new country. I don't feel comfortable talking about myself so here are some things I love and hate: