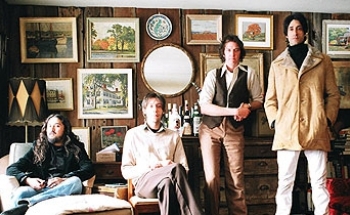 Since forming in 1998, The Sadies have quietly become one of the biggest bands in Canada. Their unique mix of traditional country and surf-tinged garage rock has seen them work with Blue Rodeo, Steve Albini, and The Tragically Hip, become the backing band for Andre Williams and Jon Langford, and even crack the charts behind Neko Case, their most frequent collaborator, and John Doe. While their assistance is constantly requested by the indie and alt. country elite, they still manage to release an album of their own every year or so, a couple of which have garnered listings by the Polaris Music Prize. Most of their catalogue has been handled by Bloodshot and Yep Roc, but they found enough time along the way to release two special 7 inch records through Mint. The three-song Cork & Monkey was released in 2001, and featured Kid Congo Powers [the Cramps, Nick Cave & the Bad Seeds] on the title track, while the entirely French sung single J'ai Essaye De Ne Pas followed in 2005.

"... their influences encompass everything from bluegrass to acid-drenched psychedelia, Bakersfield country to dirt floor dance music, creating categories all their own, with room enough for anyone in touch with rock’n’roll’s primal origins." - Jason Schneider, Exclaim