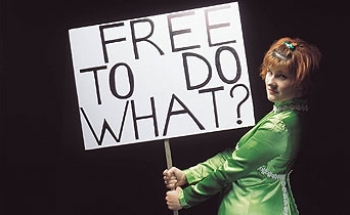 The Tennessee Twin began in Olympia, Washington way back in 1998 as the brainchild of Ms. Lucinda Marie Wolfe. "Cindy," born an identical twin in Memphis, Tennessee, found song-writing inspiration from her southern roots and desire to create music that differed from that of her punk rock peers. This effort at expanding the horizons of the Olympia music scene began with Cindy writing, directing, and staging puppet shows. Fearful of being pigeon-holed as a puppeteer, she began conceptualizing a country act with her twin, Allison, of seminal "riot girl" band Bratmobile. Unfortunately, living on opposite coasts prevented the duo's concept from becoming a reality. Nonetheless, Cindy forged ahead with her songwriting, often drawing from summers past, spent with her dad and relatives in East Tennessee.

So, you may ask, how did Ms. Wolfe end up in Canada? Well, a New Pornographer brought her up to Vancouver at the turn of the century, and "Dubya" deterred her from moving back to The States. She eventually made her way from Vancouver to Toronto in the early aughts.

When Bratmobile finally decided to grace Vancouver with its presence, Allison convinced Cindy to assemble a band and jump on the bill, marking the first public performance of The Tennessee Twin. For some time, a revolving back-up band of Vancouver, and eventually Toronto, musicians embellished Cindy's unaffected vocals, uninhibited songwriting, and embryonic mandolin playing. The Twin's old-school heartfelt ballads sprung from relationships gone wrong, politics gone awry, death, and time spent in the country. "Not long before my grandpa, Hiram Woodson Wolfe of Rutledge, TN, died, he told me three inspiring stories of familial historical significance, in this order:

1) When my great-great-grandfather from Virginia was 12, some neighbors warned his mother that the Confederates were coming to conscript him, so his mother dressed him up like a girl and sent him on foot over Clinch Mtn. to Tennessee, never to return until his 80s when my grandpa brought him to a Wolfe family reunion in Virginia to reunite with his long lost brother.

2) I am related to Chet Atkins, as my grandpa's brother was wed to Chet's aunt.

3) I am inbred ('My parents were both Wolfes of Luttrell, TN,' admitted my grandpa after suspecting me and my then-boyfriend of being related since his last name is Atkins)."

Throughtout her career, The Tennessee Twin had the privilege of playing several high profile shows, such as a mini-tour with Bratmobile, YoYo-A-GoGo festivals, the original Ladyfest 2000, Mint showcases, a triple province Canadian tour, Bob's World Famous Java Jive in Tacoma, opening for The Meat Purveyors at The Tractor Tavern in Seattle, relocation inauguration party for Seattle's ConWorks, and the sharing of a Johnny Cash song ("I Still Miss Someone") with Scott McCaughey and The Minus 5 at Zulu Records. Kindly, Mint signed The Tennessee Twin to its roster, releasing a 7" single in August 2001 and debut album Free To Do What? in February 2002. The Canadian independent narrative feature film "Mile Zero" chose to utilize The Tennessee Twin song "These Thoughts Are Occupied". Also, a bittersweet Lucinda Wolfe original appears on Mint's Christmas album.