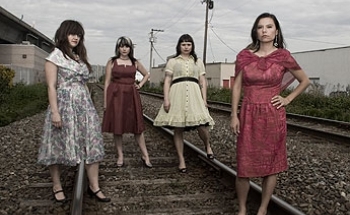 What do you get when you add four ladies, one pair of cat eye glasses, East Vancouver, a crate of old records, and a minivan named Maple Syrup?

A. A rock 'n' roll cocktail of one part retro pop, and one part attitude.

D. All of the above.

The correct response is, indeed, D. All of the above.

Eden Fineday first met Becca Stewart back in the '90s when they were both living in Santa Cruz, CA. They played in a couple of side projects together but took a break when Becca moved back to Vancouver. A few years later Eden ended up back in Vancouver and decided to hook up with her old friend. As luck would have it, Becca had recently befriended and moved in with a charming and talented young keyboard player by the name of Megan Johnson. The local band, The Cinch, were about to take a hiatus, so they approached the drummer, CC Rose, and asked if she wanted to "jam." That night Vancougar was born.