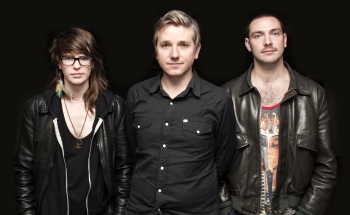 Hot Panda are just two boys and one girl from Edmonton trying to do the same thing they've always tried to do: play some kind of rock and roll that'll make people dance and feel happy. Simple stuff, right?

These kids - Chris Connelly (vocals, guitar), Catherine Hiltz (bass, vocals), and Aaron Klassen (drums, vocals) - have toured so much that their shabby van, $30 motel rooms, and strangers' floors feel more like home than their own beds. Since their first album Volcano...Bloody Volcano came out on Mint Records in 2009, they've zigged and zagged across North America (ok, minus Mexico, but still...) and Europe on planes, trains, and automobiles until they thought they might die.

They've snapped pictures of themselves under the Eiffel Tower, played on a stage once graced by the Beatles in Hamburg, and visited royal palaces in Vienna when they opened for the Von Bondies '09 Euro tour. They also had wonderful times playing at festivals like SXSW, CMJ Music Marathon in NYC, Pop Montreal, Halifax Pop Explosion, Sled Island, and NXNE. Along the way, they played with lots of other bands they love, like Art Brut, The Raveonettes, Tokyo Police Club, Chad Van Gaalen, Electric 6, Crystal Antlers, and lots more. So, in short, it's been some kind of adventure!

Yet, as great adventures often do, this one suffered some moments of struggle. Unfortunately, in November of 2009, one of their founding members left the group, shortly before the band was supposed to record their sophomore release. However, the mark of greatness is not measured only by success, but how you deal with setbacks, and despite this sad and unsettling blow, the band kept their heads high long enough to snag Catherine Hiltz as their new bass player/multi-instrumentalist. Bringing a new chemistry to the group, the addition of Hiltz revitalized the band, and gave them (at the risk of sounding cheesy) a lot of new hope and happiness.

The title of their sophomore album How Come I'm Dead? (released in October 2010) comes from a chance thrift store discovery, a book about the old Vancouver coroner. It speaks to all the weird occurrences and decisions that take place from the moment we're born, through all the twists and turns that provide the rich variety of life and culminate in our unavoidable demise. With Connelly reflecting on the isolation of long distance relationships and constant touring, the album expresses the loss of the sense of having a home, made extra weird with things like facebook that constantly remind you of all the things you're missing in all the places you're not. It feels a bit like being a ghost, being able to see and hear people you love carrying on with their lives and not being able to partake in it.

Yet, like the title of that book, How Come I'm Dead? has playful sense of humour to it, noting the lightness that shines around otherwise dark times. The album has moments of dreamy noise, circus freak dance, heartbreaking country ballads with screeching metal guitar solos, lovely pop harmonies, psychedelic drones, and straight up pop/rock numbers. There is even a a grindy techno song and a hip-hop track that includes a bass scratch solo and enough f-bombs to earn them an adult content warning sticker. There is a sense of playfulness throughout the record, with enough common threads that the Hot Panda-ness still comes through with crystal clarity. Following another bout of extensive touring, the band's third long-player for Mint, Go Outside, arrived in 2012 to wide acclaim.

Hot Panda at the beach
Photo by: Robert Fougere
Download