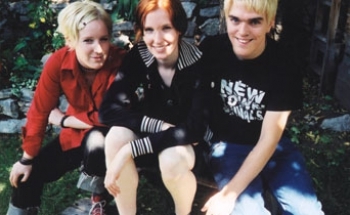 With their feverish punk energy, Operation Makeout were darlings on the Vancouver scene from '99 to '03. Sadly, the project was short lived, and the band split after releasing an EP and a full length on Mint. Here's a note from Katie Makeout circa '01, check out her rock 'n' roll spunk! ...Oh, and, we're not sure whether that email address is still active, but, hey, it's worth a try!

Put your ear to the speaker and press your lips to the cd! Welcome to the makeout station. Spreading the indie punk rock your way since 1999, operation makeout features Katie on guitar and vocals, Jesse (formerly of d.b.s.) on bass and vocals, and Anna on drums.

Katie Makeout here to spread the word on how the makeout session began. Anna and I met while attending high school at Ladysmith Secondary School (coincidentally, Ladysmith is the town that produced Spamala Anderson, and is just 10 minutes from the town that produced the world famous Nanaimo bar!). We started our first band together in grade ten and believe it or not, Anna's first drum set (err drum*) was a 4 gallon ice cream bucket that I had painted for her. Since then, Anna has acquired a much nicer drum set (which is prominently featured on our new CD!).

Operation Makeout started up in a dank and dusty basement in the summer of '99. Many hours and many kind neighbours later, we released a 10 song self-titled CD, survived a west coast tour, and embarked on many brief excursions to U.S. destinations, (our most cherished of which is Tacoma. ALL HAIL THE JAVA JIVE. It is a giant teapot/bar and if you don't believe me, drive down there for yourself!)

In February '01, a line-up change led to the addition of Jesse on bass and vocals. Jesse also owns and operates the soon to be world famous Rec-age recorders, which is where we recorded our brand new EP First Base. Now that the fantabulous Mint Records has released our CD we are ready to rock across the country, tell as many bad jokes on stage as possible, and eat burritos till our eyes turn brown!