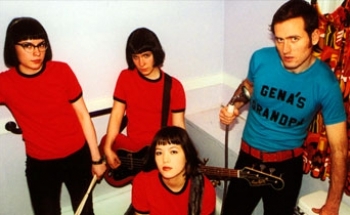 Sick of watching all the boys rock out, the Riff Randells formed their band in the summer of '99. The band was founded by Mar Sellars and Kathy Camaro during an evening at the Anza Club. They teamed up with Anne-Marie (White Lung) soon after and began practising Joan Jett and Pointed Sticks covers in Mar's bedroom. Later, Sean Raggett became the beautifully dressed frontman of the band after a gruelling audition during which he opted to wear a speedo. Sadly, this line up did not last long as the Riff Randells ran into some soap-opera-like troubles during their first cross-country tour. But before Raggett left the band, the hits of that RR era were recorded and released as a 7" on Mint Records. It included old favourites like "After-School Special" and "Sweet 16".

Since that summer of 2000, the formerly shy guitarist Kathy Camaro took over as frontperson of the band. The band then took off on another cross-country tour, and then released their debut with Kathy on vocals, once again on a 7'' record with Mint. The single "Who Says Girls Can't Rock!" proved to everyone that these girls could!

After that cross-country tour with Chixdiggit, the band came home and to the surprise/shock of many people, fired their bass player Mar (after which Mar started her own band, The Ewoks, and played with the Duloks for a time as well). During those rocky weeks, Kathy Camaro continued to write songs in her bedroom and came up with many of the songs that would become 2002's S/T EP (Delmonico Records). The group's full length debut Doublecross arrived via Dirtnap Records in 2008.

Just like local heroines the Dishrags, the Riff Randells always knew the band's existence would be a rock 'n' roll roller coaster ride, and they wanna thank all their fans that have stuck with them through all the Riff Randell-mania!