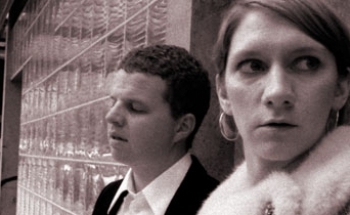 In the summer of 1998, friends, and former lovers, Paul Pittman and Lucy Brain were halfway thinking about starting a band. Wanting to keep it casual and fun, they practiced only when the mood hit and performed occasionally at parties. That autumn, a mutual friend asked them if they wanted to be the opening act for a local show she was putting on at Ms. T' s Cabaret. They accepted, but not before welcoming artist/guitarist Colin McLean into the fold. Band names were quickly made up and rejected but for some reason, Young And Sexy stuck.

Over the next year, the trio began making a name for themselves playing local Vancouver venues like the sadly missed Sugar Refinery and the aforementioned Ms. T's Cabaret. The lineup was expanded to include drummer Ron Teardrop, keyboardist Ted Bois, and bassist André Lagacé [Colin had moved on]. It was with this 5-piece incarnation of the group that Young And Sexy's debut Stand Up For Your Mother was recorded. Mother was released in March 2002 to critical acclaim and spent some time on the college charts, also making appearances on a number of year-end lists. AMG described the songs on the album as "beautiful and tough as nails" while Now Toronto forgave "the Vancouver artsies (...) for their dorky moniker" because of their "stellar debut".

The band did a small western Canadian tour in support of the record as well as an immensely successful showcase at NXNE in Toronto. Work began immediately on their sophomore release Life through One Speaker. The album is steeped in '60s and '70s pop, ranging from Beach Boy-esque harmonies and Pink Floydian grandeur to relatively straight up pop a la Nick Lowe. Speaker was released in the fall of 2003 and, although a less eclectic affair than the debut, earned uniformly great notices in papers and websites across Canada and the States, even finding a spot on The Globe and Mail's year-end "best of" list. The year was rounded out with a tour across the United States with then-labelmates The New Pornographers.

Early 2004 saw the band record a 7-song live session with CBC Radio 3. This would be the last time that particular lineup would record together. Both Ron Teardrop and Ted Bois departed shortly thereafter.

While the transition was not easy, Y&S forged ahead. André switched from bass to lead guitar, and new members were quickly, though not hastily, brought on board: bassist Brent McDonald and drummer Alex Brain (Lucy's brother). This new lineup had been together only a month when they were asked to headline the Western portion of the CBC Radio 3 cross-Canada "Connect the Dots" tour from late April to early May 2004. The tour was a great opportunity for the new lineup to find its "sound" and hone new material for Young And Sexy's 3rd album Panic When You Find It.

Released in February of 2006, Panic When You Find It saw Young And Sexy coming into their own. While the striking harmonies and songwriting were still firmly in place, the energy of their dynamic live show was at long last captured on tape. And, perhaps most importantly, the band's wide range of influences, so apparent on the first two albums, had been internalized and fashioned into something unique. This made Panic When You Find It clearly Young And Sexy's most fully-realized and rewarding release to date.

With the release of their fourth record in May of 2008, The Arc found Young And Sexy entering their 10th year as a band. The roster of Paul Pittman (Vocals, Guitar), Lucy Brain (Vocals), André Lagacé (Guitar), Alex Brain (Drums), and Brent McDonald (Bass) returned in full force, with a set of songs destined to appeal to the true music lover. Those eleven new songs wielded the rare gift of both artful experimentation and strong melodic invention. The Arc is full of classical, baroque pop, and prog rock influences. Recorded and produced at The Hive Studios in Vancouver B.C. by Colin Stewart (Black Mountain, Cave Singers, Swan Lake), The Arc fit securely into Young And Sexy's ever-changing musical canon, establishing the band as one of Canada's national treasures.

"...some of the best Canadian pop music this decade." - PopMatters

"With the band given time to settle in and get comfortable, The Arc sees them finally stepping out of the shadow of "Canada's response to Belle & Sebastian" and into their own light. Lucy's vocals seem to be more hopeful than ever, with a newfound sense of spiritual awakening, while the band chimes its baroque pop and subtle prog in perfect key." - The Skinny

"Young and Sexy play vividly pretty orchestral pop anchored by confident instrumental skills and Brit-inflected vocals. The closest comparison is Belle and Sebastian, but with song titles like “The City You Live In Is Ugly”, Young and Sexy don't take themselves nearly as seriously as the moody Scots." - Montreal Mirror