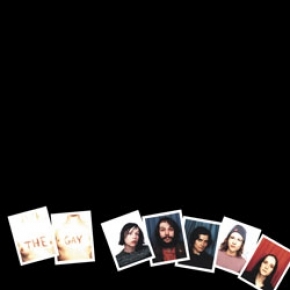 The Gay's first ever release instantly encapsulated everything the indie super-group was about: tight vocal harmonizing and accordion grandstanding fleshed out by '70s pop songwriting sensibilities. "Vacation" and the title track later appeared on their debut full-length, You Know The Rules. But, as the completists know, this is the only release where you're gonna find the addictive cut "Eye For Love", and on future-proof 7-inch vinyl.

Here, bassist Coco Culbertson has led them to a melding of Fleetwood Mac classic vocal rock meets Sleater-Kinney influenced trade-off leads with their overall approach... This three-song niblet is nearly over as soon as it starts, yet if it's an accurate representation of their past accomplishments and a glimpse of their potential, then expect to hear more from this unpretentious five-some. - Emily Orr, Exclaim

It's a mix of male and female vocals, beguiling indie pop cuteness, and an underpinning sense of musical economy that can only come from listening to old pop LPs in the basement of that hometown band hotel. "Fishin' Jim"'s jangling guitar and "ba ba bah"ing is enlivened even more by an understated accordion, while "Vacation" pulls Dusty Springfield into the International Pop Underground. Gay is sure to appeal to fans of the New Pornographers, Carolyn Mark, or the comparatively upbeat moments of Slumber Party. It also (wonderfully) does nothing to dispel outsiders' warped image of Vancouver's thriving scene. - Johnny Loftus, AllMusic