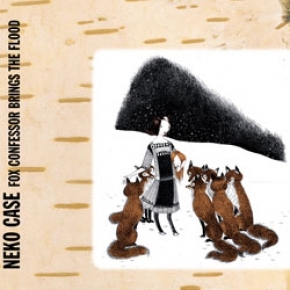 "Neko Case is on her way to well-deserved status as a music legend for our generation." - Bust Magazine

Neko Case's fourth studio album, Fox Confessor Brings the Flood, was simply one of the most anticipated and respected releases of 2006. Here, Neko stands poised, ready to break into the company of mavericks like Wilco, Beck, and Elliott Smith; like them, she transcends genres and demographics. As older fans swoon to her roots-infused vocal stylings, alternative kids dig her New Pornographers pop moves and David Lynch inspired, cinematic lyrics.

Collaborating with the likes of The Band's Garth Hudson, Calexico's Joey Burns and John Covertino, and Giant Sand's Howe Gelb, Neko displays a newfound love of studio artistry on the dark orchestral sweep of "Dirty Knife" and the Ennio Morricone meets Brenda Lee classicism of "Star Witness." Most notably, Neko has for the first time recorded songs like "Hold On Hold On" that harken back to the classic three-minute pop of The Mamas and the Papas or The Byrds, offering an entry point for a whole new audience into the lush, arcane universe of Neko Case.